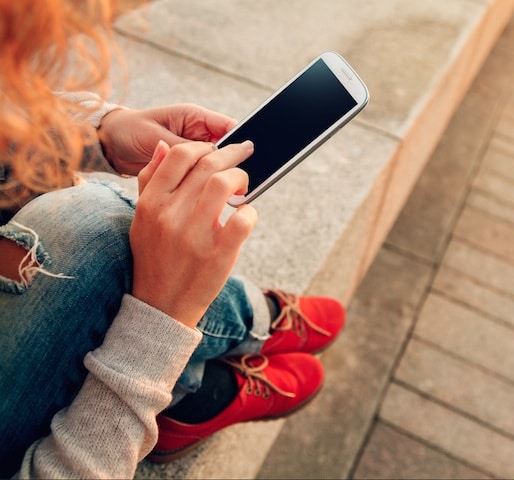 The engagement of citizens in state governance via official government websites and social media platforms existed in Ukraine long before the Euromaidan revolution. In addition to these official e-participation channels, many opinion leaders, such as politicians, activists, and journalists, maintained personal online presences for the sake of communication with the public. Euromaidan marked the beginning of a surge in grass-root e-activism in the country, a form of citizen engagement that goes beyond government-initiated e-participation and public communication. Voluntary coordination websites, expert communities on social networks, and crowdfunded online media – all became very prominent during the Euromaidan revolution. Many revolutionary events took place due to cooperation between citizens online. State authorities also made significant efforts to steer public opinion via the Internet. In this article, the current situation of e-democracy in Ukraine will be discussed, with main observations being that, while official e-participation channels are remaining unpopular, public communication via social media is becoming more influential, and e-activism is undergoing the process of institutionalization after the revolution.

To begin with the legal basis of e-participation in Ukraine, the law “On Information” was enacted in 1992 and recently updated in 2015. This regulation stipulates that information can be in the form of electronic data and that citizens have the right to obtain this information. The second law, “On access to public information”, was enacted in 2011 and was also updated in the current year. The law declares that information, including materials in open data format, about the decisions of people in power must be public and enacts the procedures to provide this content. In order to receive feedback from citizens, the law “On citizen appeals” was passed in 1992 and updated in 2014. Through this law, various types of citizen appeals, including electronic ones, and the ways they must be addressed by the government are defined. There is no separate law on e-participation, but there are several decrees within the mentioned laws that lay out principles related to the concept. For instance, Decree №996 by Parliament of Ukraine “On the provision of public participation in creation and implementation of state policy”, which was adopted in 2010 and updated in 2015, establishes the principles of consultation with the general public during the creation and implementation of state policies, including electronic means of consultation. Overall, the mentioned legal instruments create the government’s foundation for providing information and involving citizens in the process of amending the state agenda. However, the conditions under which citizens can review this agenda and receive feedback from the government are specified separately for each administrative unit. Few general requirements, for instance having official websites, consulting citizens, or reacting to citizen appeals, exist for all state bodies.

Under such circumstances, online collaboration between the government and citizens is very scarce. The government is obliged to provide certain information and tools for reaction to this information to the citizens, but there is no obligation to provide meaningful and engaging feedback after public consultations. Also, there are no collective participation tools where groups of citizens would influence the issues of their interest. These conditions make official e-participation highly unpopular. For example, the website for public consultations about new law projects, administered by the Cabinet of Ministers, has around four thousand registered users, which is a very modest number for a country of around forty million inhabitants. In 2014, the average number of unique visitors per day (by IP address) was around five thousand. Only seven hundred sixty four proposals were submitted by citizens during the website’s entire lifespan from 2007 to 2015. It seems that the transformation of this situation should start with the revision of the laws, as citizens expect to have more tangible influence as a result of their online engagement. 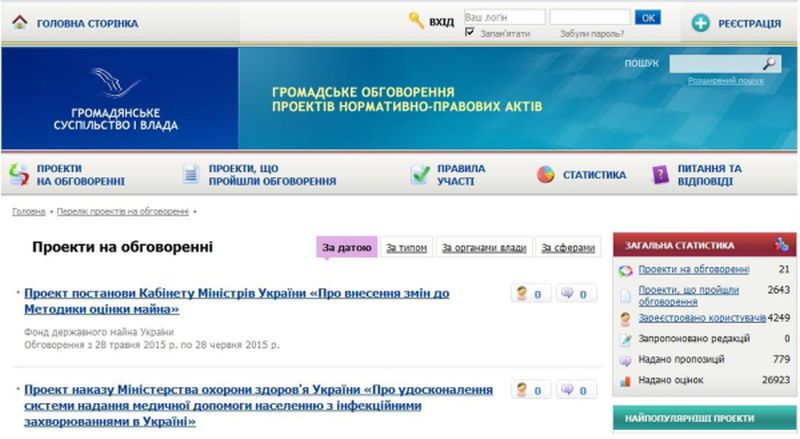 The page for discussing law projects at http://civic.kmu.gov.ua

It is worth mentioning that during the revolutionary events of winter 2013-2014, government websites and social network pages gained increased visibility, however this was due to negative reasons. As these were administered by the authorities against whom the uprising started, their online responses to the actions of revolutionaries were read by many. For example, the anti-protest laws from the 16th of January that imposed various restrictions on public gathering drew many visitors to the website of the Parliament. Also, the authorities fought Euromaidan supporters in social networks by posting alternative information on government and personal pages. In contrast to official e-participation channels, maintaining official pages in social networks is not required by law. Today, the content on such pages continues to be important for the sake of public communication for the new people in power. For instance, the Facebook page of the President, Petro Poroshenko, has around 355k subscribers, much more than the audience of the mentioned consultative portal. Another example is the personal website of the Prime Minister, Arseniy Yatsenyuk, which is linked to his page on Facebook with 334k subscribers. It seems that this demand is related to the necessity of receiving information about state events that impact every citizen and the convenience of social networks. The government officials follow their audience in this regard. At the same time, official e-engagement portals like the mentioned one for civic consultations and the single portal for e-appeals did not become more popular after the revolution. In fact, the last one has not been updated since 2012.

During the revolution, both supporters and opponents of Euromaidan created voluntary websites and social network pages to self-organize. Facebook and Vkontakte have been particularly useful for this activity, as both social networks have an audience of several million in Ukraine. Usually, the creation of a new website was accompanied by the creation of its page in one or more social networks in order to attract the viewers. For instance, Virtual Maidan is a website that played a crucial role for information exchange among revolutionaries. The Facebook page of this site, where users still come together and communicate, has around 46k subscribers today. Another example is Euromaidan SOS, a website that was targeted to volunteers ready to provide urgent help, especially medical assistance. Their Facebook page maintains 125k followers today. Though these websites lost their relevance after the active street events, their pages are still actively used for news exchange.

Additional e-communication channels that also grew fast during the revolutionary events represent online media. Specifically, three new online media channels streamed the events live and provided most important news. Often, they relied on direct evidence from citizens that called or left a message online. As a result, Hromadske.tv became an established Internet channel, Espreso.tv entered digital and cable TV, and Spilno.tv focused on streaming social events live. The first of them has the largest Facebook audience – around 350k page followers. In addition to these channels, several new media-platforms were born. The most successful of them, Ukrainian Crisis Media Center, became a regular place for holding important briefings and press conferences. This project is institutionalized as an NGO and remains vital in post-revolutionary settings.

Coming to public communication, opinion leaders began actively using Facebook in order to promote their causes and influence the public. As most know, the first gathering on Maidan happened after a Facebook post by Mustafa Nayem, a journalist whose page is followed by hundreds of thousands today. Facebook also gained more significance due to military events in Eastern Ukraine. On the social platform, several influential volunteers, such as Yuriy Biriukov (around 130k followers), and combats, such as Borislav Bereza (about 115k followers), appeared and gained interest. The first-hand information became so valuable that their pages built a large audience over a couple of months. Right now, these and many other opinion leaders continue engaging with citizens through their social media pages.

Finally, several expert communities were formed online. Such communities represent the views of specific groups of people. For instance, New Country, a vision project that unites mostly business people, had an open admission procedure through their Facebook page. Most important results from the work of this community are published on their page as well. Today, this organization creates the agenda for state policy in economic reform issues. Another example is Reanimation Package of Reforms, a joint project of experts from several influential NGOs. Their website is used for informing the public about the activity of expert groups. It is peculiar that their Facebook page has a slightly different use, as it particularly serves to mobilize citizens to support the results of expert work during parliamentary hearings.

The main finding from this study is that the official e-participation platforms in Ukraine are less successful in citizen engagement than universal public communication platforms. The online activities mostly take place on civic or personal fora, with Facebook playing a particularly important role. Also, state officials follow their audience, paying more attention to personal pages than official institutional channels. In my opinion, this situation is related to the absence of legal obligations on the government to make the collective will of citizen groups influential. Moreover, the communication on official e-participation platforms does not result in meaningful and engaging feedback from the government, which negatively impacts the interest in them.

At the same time, official tools have a number of potential advantages for the society, if they become more developed. To mention some challenges of the present situation, volunteering projects and social networks contain a lot of irrelevant or repetitive information, these places are populated by bots and are often used for manipulating public opinion. So, official e-participation tools should be further strengthened by law. At the same time, e-activism among citizens is increasing, and the main challenge is to channel this activism from social networks into new government e-engagement platforms. To reach this objective, the culture of online citizenship should be promoted through awareness campaigns. Ukrainian citizens should be well-informed about upcoming e-participation opportunities in order to benefit from them.

Ievgen Bilyk is an intern at e-Governance Academy. He is currently obtaining M. Sc. in E-Governance Technologies and Services. Ievgen has been one of the initiators of the first e-Democracy project in Ukraine, while working at the Center for Innovations Development at Kyiv-Mohyla Academy (Kyiv, Ukraine).

Share:
Previous: Conference “Efficient and Transparent Solutions for the Cities” in Lviv
Next: Experts in Georgia to share the Estonian e-Governance experience
This site uses cookies as explained in our privacy policy. If you want to learn more or change your settings, please refer to the Personal Data Protection. OkPrivacy policy