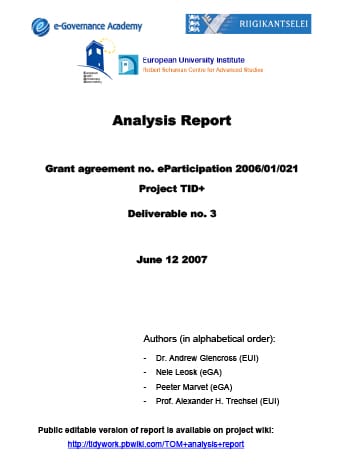 This report analyses the current Estonian e-participation tool, TOM (the acronym for “Today I Decide” in Estonian), launched by the Estonian State Chancellery in June 2001. The TOM tool is a public participation portal (now https://www.osale.ee/), allowing citizens to engage more directly with the legislative and policy-making processes either by proposing new legislation or by suggesting amendments to existing laws. In launching TOM, the Estonian government was among the pioneers in the field of e-participation, itself part of a broader trend towards the implementation of e-government.

The report is divided into two major analytical sections. The first, scrutinizes extensively the usage data, examining general user data including level of activity and the sources of traffic activity. The second part of the report uses detailed survey data from TOM participants as well as interviews with civil servants who responded to TOM-generated ideas to analyse how citizens and public officials engaged with the TOM initiative and their level of satisfaction with the process of e-participation it enabled.