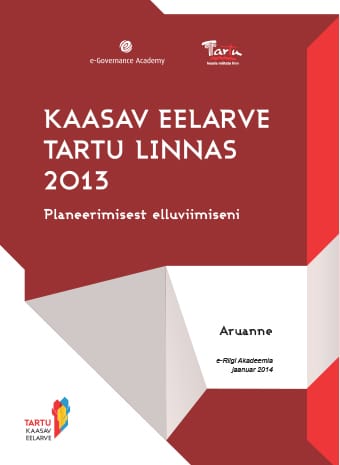 Report:Participatory budgeting in Tartu City 2013 – from planning to implementation

In 2013 Tartu City became the first Estonian municipality to start with participatory budgeting – citizens were given the possibility to decide over a small part of the city budget. This happened in cooperation with the e-Governance Academy who acted as an advisor in the process.

The process started in March 2013 and reached the final – the public voting and approval of the city council – in December. The whole journey is described in the report by Kristina Reinsalu who acted as an advisor in the project.

As usual when starting with something new, everything did not run smoothly at first. The report will reflect the successes and challenges as well as provide recommendations for changing the process and better communicating it to the citizens. The document is hopefully also inspiring for other municipalities.

More information (in Estonian) is available on the Tartu City website.