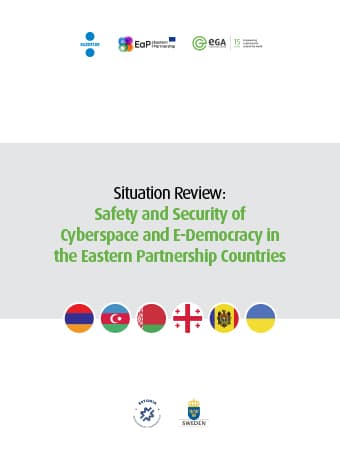 Situation Review: Safety and Security of Cyberspace and e-Democracy in the Eastern Partnership Countries

The Situation Review of Eastern Partnership countries provides an overview of the safety and security of cyberspace and also e-democracy’s current state-of-affairs in Armenia, Azerbaijan, Belarus, Georgia, Republic of Moldova and Ukraine. The Review highlights best practices from these countries and provides concrete policy recommendations for increasing safety and security in their cyberspace and further developing e-democracy initiatives.

The Situation Review was created by the e-Governance Academy in cooperation with the Estonian Centre for Eastern Partnership. The work was jointly financed by the Estonian Development Cooperation and the Government of Sweden.

During a period of April-June 2017, the research team from the e-Governance Academy interviewed experts and civil society representatives from all six Eastern Partnership countries. In the analysis phase of the project and in putting together the policy recommendations the team also used data available in other publicly available studies and databases. The safety and security of cyberspace was evaluated using the e-Governance Academy’s own National Cyber Security Index methodology.

Findings of the Review were discussed at the e-Partnership Conference, which took place on October 4, 2017 in Tallinn, Estonia. The conference was part of Estonia’s Presidency of the Council of the European Union.