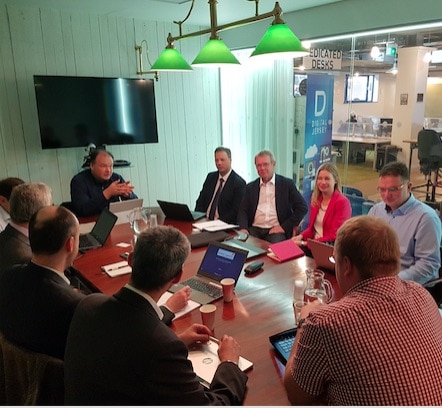 Several high level meetings with decision makers and e-Government team were held in order to discuss the future cooperation between Jersey and Estonia. Moreover, EGA was invited to join the Digital Jersey Board meeting. The meeting was attended also by Siim Sikkut, Estonian Government’s Chief Technology Advisor who has been appointed as Special Adviser for Digital Jersey with an aim to support digital  transformation of Jersey.

eGA also had the honour to participate in the opening ceremony of Eagle Lab that is helping to support digital literacy and innovation for people of all ages in Jersey.

Jersey (officially the Bailiwick of Jersey) is a small island in the channel La Manche. There lives approximately 100 000 people. The island is Crown dependency of the United Kingdom but it is not part of UK or of the EU.