After hearing that probably there will be an expert mission to Nagaland I couldn’t in the first instance remember in which corner of the world it is. The name sounded exciting and in a way familiar so I was sure I must have heard about it before. I turned to Google to get some answers.

But of course! Nagaland is a state in northeast India, where lives a nation called Nagas. One of the representatives of this nation, Mr. Vizo, who is responsible for the development of e-government in Nagaland, had been visiting Estonia earlier together with the Indian delegation. What he had seen and experienced in Estonia inspired him so much that with the support of Indian central government he launched a project to introduce the Estonian e-government to the politicians and officials of Nagaland. 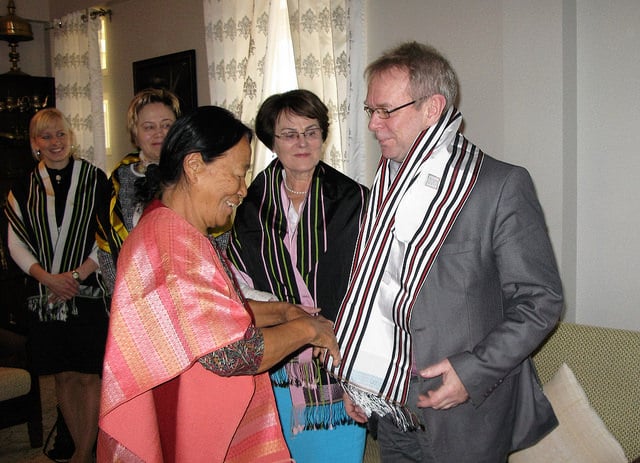 Surprises started right after a long flight when arriving to Dimapur, where is the only airport connecting Nagaland with the rest of the world. An armed police escort was waiting for us there, which at first seemed as a security exaggeration by our host. Although, by that time I had already familiarized myself with the history and problems of the Naga nation, I had really yet to realize the scale of the problem. More than half century on going fighting against the Indian central government meant that there was a necessity to be ready for unexpected dangers. Fortunately we did not meet any of these dangers but the police escort was a great help in the narrow mountainous roads when getting to the Nagaland’s capital Kohima and also in getting through the traffic inside the city.

There was another surprise waiting for us when arriving to the hotel – a fully decorated Christmas tree and familiar Christmas carols. It became apparent that Nagas are Christians and belong to the denomination of Baptism. This is the legacy of British missionaries who taught the word of the Lord to wild Naga tribes living in mountains. Nagas are appreciative for that as a common religion is the foundation for the common identity of their nation comprising 16 different tribes. Belonging to a tribe, which used to cause a lot of killing between rival tribes and gave Nagas the name of headhunters, is still of great importance. To this day their customs rather than the Indian government laws regulate their everyday life.

In no way wants Nagaland to be a bystander in the global development of information society. Indian central government strategy “Digital India” offers the states various opportunities to take initiative and that’s exactly what Nagaland has done. There are many important projects going on, which should improve the accessibility of Internet and create new ways for people to use e-services all over Nagaland. For an example, a project called e-District, which should give technological and organizational capability to offer e-services to citizens and entrepreneurs to all of the 11 regional administrations of Nagaland, is in pilot phase. In many villages common service centers have been established which should give the community access to Internet and services offered there.

Nevertheless, it seems for now the picture is prettier on the paper than in real life. There are problems with technological infrastructure as the mountainous landscape, frequent landslides and earthquakes make it difficult to use the optical fiber network. One possible solution could be Wi-Fi network with service points on the top of the mountains. There are mostly 2G networks in villages, less often 3G. Billboards with 4G advertisements could be seen beside the roads, which is a sign that technology keeps evolving.

The real challenge for Nagaland government is the officials’ and its institutions’ will and capability to adapt to the new situation. Business is still done on paper and the central information and service portal  offers only a limited number of institutions’ request forms to download. To change this situation the efforts of only a handful enthusiastic officials is not enough. There is a need for the attention and support of political leaders. That was in essence our missions’ goal – to inspire the key persons in Nagaland to follow the example of Estonia in developing their e-government.