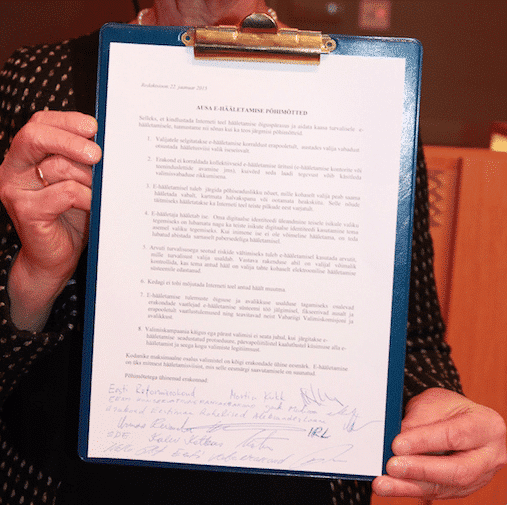 Six parties decided to follow the best practices of e-voting

At today’s e-voting seminar, most of the political parties taking part in the Parliament elections agreed to update and follow the good practice of e-voting.

According to Liia Hänni, head of e-democracy domain at the e-Governance Academy, it was the recent changes to the e-voting organization that created the need for updating the good practice text. “Now the voter has the possibility to check whether their vote has securely arrived in the e-voting information system at the National Electoral Committee. Nevertheless, the good practice still advises people to cast their vote using a computer that they trust”, Hänni explained.

According to Liia Hänni both the public and the political parties need to be reminded of all principles of e-voting from time to time. “It is most important that the voter can make an independent choice without being pressured. This is why the parties promise not to organize any collective e-voting events, which could threaten the freedom of choice. Voters should also note that it is not allowed to give their digital identity to another person for casting the vote,” Hänni said.

Hänni finds it positive that most parties joined the good practice, showing that they are able to agree on certain joint rules of conduct. “If we rely only on laws without morals, this results in schemes which are legally acceptable but morally perceived as wrong. The parties now promise to avoid such schemes,” she further explained.

Hänni hopes that the majority support of the parties to the good practice consolidates the position of Internet elections also among the electorate, making it an obvious part of the Estonian election system, without any political party questioning its legitimacy.

Share:
Previous: Guests from National Authority for information society of Albania (NAIS)
Next: ITU ranks Estonian cybersecurity among the top five in the world