Podcast 🎧 & blog: Digital tools in the global battle against corruption

“Corruption as a disease, for which transparency is the cure” is a politically popular analogy, that surely resonates when trying to capture such widespread, global challenge all countries continue to face today. But researchers contend that the actual manifestations of corruption are far too complex to fit into the simple frames built by this parallel.

If we build a conceptual bridge with healthcare, the analogy holds more easily. The sector has been long benefitting from technology and emerging innovation – can the same happen to the fight against corruption?

Together with Carina Paju, Executive Director at Transparency International (TI) Estonia, and Kristina Reinsalu, Programme Director of e-Democracy at e-Governance Academy, we explore some of the latest digital tools deployed to combat corruption.

Listen to the podcast featured by Carina Paju and Kristina Reinsalu. The discussion is moderated by Federico Plantera.

Stakes are high in the battle against corruption. According to the United Nations Office on Drugs and Crime (UNODC), corruption and fraud globally amounts to 10% – 25% of public procurement budgets, an estimated average of USD 9.5 trillion per year in absolute terms.

The lost monetary value translates into a domino effect of negative “real life” consequences. From the critical infrastructure that will never be built to the equipment that never reaches hospitals, corruption directly impacts people’s wellbeing and livelihoods and feeds into the culture that hatches it. Unfortunately, “The more advanced a country is in exposing corruption, the more complicated the problem becomes – something universal to all kinds of crime,” Carina Paju observes.

Types of corruption range from everyday petty bribes to higher level conflicts of interest. What often entails a choice between public interest or personal gain, may not even involve direct monetary exchange. “For example, using private connections to gain or grant an unfair position of advantage,” Paju points out. “The immediate effect is not always apparent, but it contributes to a culture, which normalises such practices,” she warns.

With regard to the deployment of digital tools, Kristina Reinsalu (eGA) highlights how Estonia’s digital state infrastructure has contributed to foster institutional trust in society through built-in transparency. One successful framework, however, cannot carry the weight of countering all forms of corruption. Additional targeted interventions are necessary to tackle different layers of the problem within a specific national context.

The recently developed digital platform Opener seeks to target networks of corruption in public procurement processes. “The main idea behind Opener is to enable the automatic detection of potential conflicts of interest, based on open data from public sources,” Paju explains. “Using the enormous amounts of available data, otherwise humanly impossible to go through, the platform helps uncover potential connections between people involved in different public procurement processes,” she continues.

Opener seeks to empower stakeholders by helping them start connecting dots before delving into further investigation. “By no means is Opener a way to confirm corruption cases with certainty,” Paju clarifies. “It is mainly meant to be used by journalists, law enforcement or academics to go more in depth and determine where potential collusions could be.”

The current demo version of Opener covers limited data from the two partner countries – Estonia and Latvia – with plans to launch the full version and expand into five more countries by the end of this year.

Video: How to benefit from Opner?

In cases where the lack of higher-level institutional responsibility is greater, meaningful change could be pursued by turning to citizens. “A few years ago, we conducted a study on e-democracy in Eastern Partnership countries,” says Reinsalu (eGA), providing the background for eGA’s recent collaboration with the Centre for Policy Reform in Moldova. “One of the very clear findings was that for a lot of countries, like Moldova, where corruption is still the number one problem, legislation to combat the issue is already in place,” she explains.

This led to the decision to introduce a tool that would target citizens with a call to action. “AntiCorr is a platform that enables citizens to educate themselves, raise awareness and develop their perception to recognise small-scale corruption,” Reinsalu says, describing the solution.

“We did not go into grand corruption but rather aimed to help people recognise the everyday cases. Sometimes they’re not even considered significant, yet they pile up,” she observes. The interactive app enables citizens to test their knowledge as well as report cases of perceived corruption that might deserve further investigation. 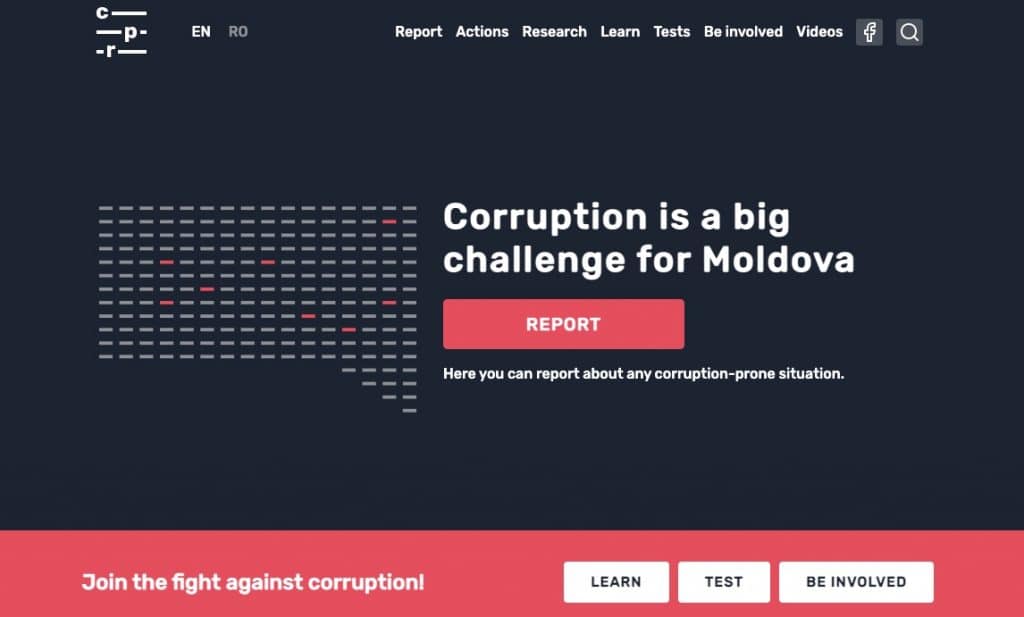 Screenshot of the Anticorr Platform

Transparency as a means to long-term goals

Beyond the empowerment of stakeholders, we inevitably arrive at the question – what follows the achievement of transparency?

Reinsalu (eGA) believes in the long-term impact of public monitoring mechanisms. “For example, with AntiCorr, our partners select some of the most outstanding reports and immediately publish their findings on their Facebook page, also outlining the actions they will take,” she explains. “I believe that no institution wants to be publicly deemed as corrupt, so perhaps such transparency could induce a sense of fear and responsibility,” Reinsalu suggests.

“Transparency is definitely not an end in itself, but it is a means towards accountability,” Paju agrees, following a similar line of reasoning. “I believe if real accountability does not follow, there is no point in transparency. So, we need strong institutions and a change of culture.”

Accountability is no short-term achievement, because it is a two-way street. On one hand, demands for it come from the bottom, ordinary people, but corruption can hide even in the smallest things. On the other, the sense of civic responsibility must be a given among the economic and political élites – and instead, this often gives way to particular interests and individual gains.

But with a clear goal in mind, improving a distributed and shared public good, digital tools hold the potential to empower both law enforcement and citizens, playing a role in increasing the mutual trust our society needs.